Sport in the Park 2013 saw the inauguration of the new croquet facilities on the playing field.

There are currently two pitches marked out and we have two full sets of croquet equipment. The club plan to add another full sized (35 yards by 28 yards) lawn in the spring. Attendance has averaged at over 12 per session and the weather has been perfect.

The sessions have been arranged for Saturday afternoons at 3 and, generally, Wednesday evenings at 5.30 - all weather permitting of course. Current playing fees are pegged at £1 per session and players may register to use the equipment outside of these sessions. The weather should force the club meetings to end within the next three weeks and they will start again in April.

Eaton Park on a glorious sunny evening was the setting for a friendly meeting between well established Norwich Croquet Club and newly formed Hethersett Croquet Club, the two main clubs in the Norwich and South Norfolk area.

Hethersett Croquet Club was formed in August 2013 with help from Norwich Croquet Club and following several enquiries from the ‘Sport in the Park’ event on the Memorial Playing Field which was supported by Active Norfolk.

The club received a substantial grant from the Hethersett and the Meltons’ Sports Association to enable it to purchase equipment and to adequately prepare the lawns for this season.

The club meets on Hethersett Memorial Playing Field, close to the bowls pavilion, at 5 p.m. on Wednesdays and 2.30 p.m. on Saturdays – unless the weather is on the wrong side of showery. More information on the Hethersett club is available from Peter Hoult on 01603 811337 – or email hethersett@aol.com.

Norwich Croquet Club was formed a number of years ago and has the use of a lawn at Eaton Park and is situated between the model boat pond and the hard tennis courts.

The club meets for Association play on Monday and Saturday afternoons, and for Golf play on most Tuesday, Thursday and Saturday mornings. Coaching takes place on Thursday evenings. The club has a web site at www.norwichcroquetclub.talktalk.net or more information is available via the secretary on 01603 506169.

Both clubs enjoy a playing season running from Easter until late September or early October. Equipment is available to use and both run free ‘Come and Try It’ events during the year.

Croquet is well-known as a tactical, absorbing and enjoyable game suitable for all ages with two versions of the game currently being played in the United Kingdom -

Golf Croquet is a simpler, but competitive and more sociable variation where all four players are on the lawn throughout, taking turns. It has grown rapidly in popularity and stature. Association Croquet has developed from the Victorian game, which requires a variety of skills that are acquired by playing regularly with advice and coaching. 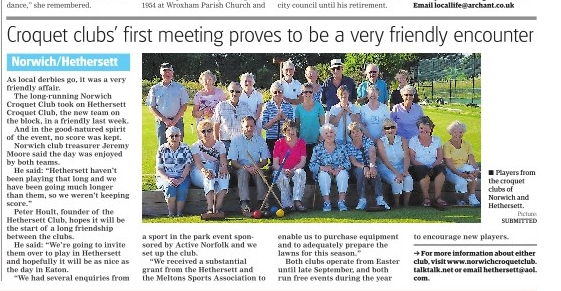